Deposits are now disabled but you can still withdraw your tokens and collect any unclaimed rewards.

The Flame Token (XFL) is an ERC-20 token deployed on the Ethereum network. At its core, it serves as a native currency on an existing platform for adult content (Sharesome). In the long-term XFL is designed to become the de-facto medium-of-exchange token for adult content.

Flame Token is designed to be both liquid, deflationary, and fairly distributed. This is achieved via its innovative approach to an initial liquidity offering (ILO) where 20% of the total supply will be distributed as rewards for liquidity providers.

Additionally, a percentage of all spending on the Sharesome platform will be dedicated to a perpetual Liquidity Provision (LP) Program, where the proceeds will be permanently locked in the token’s main liquidity pool.

Payment in the adult industry however has always been a problem, both in terms of users being wary to submit their credit card information (both due to scams and not wanting the transactions on their bank statements) and because of payment organizations trying to outright ban payment to such sites.

Paying with cryptocurrency seems to be the obvious solution, but it is also nothing new, multiple currencies have tried (and some succeeded) in penetrating this market. A successful utility token in the area needs to:

The Flame Token (XFL) was created to address the issue above while possessing all of the needed qualities to be a successful utility token. It is important to point out that most tokens in the area start with the concept of:

The Flame Token on the other hand:

Briefly about Sharesome:
Adult content creators spend zero on paid advertising because they can’t. Their customer acquisition funnel is a minefield of regulations and relies 100% on organic social media growth. They have to blend in with millions of mainstream influencers and creators and have to be extra-creative to get their message out. Nevertheless, they created a billion-dollar market.

While currently Flame Token is tightly coupled with Sharesome (in the sense that this is the main use case of the token), the vision is that it can become the de-facto medium-of-exchange token for the adult industry. Since this assumption is a big leap from the current state of affairs, the current document will examine the tokenomics of the Flame Token only in the context of the Sharesome platform. If the token manages to expand beyond this, then its growth potential would be significantly higher.

Running a project’s token economy is akin to running a small country. Without adequate monetary and fiscal policies, even if the token sale is successful, you still might be setting up for failure down the road.

The token’s monetary policy mainly pertains to the number of tokens as a total and the release schedule of those tokens. It also covers any mechanisms to expand or contract this supply as needed or even introduce deflation mechanics or continuous inflation.

On the other hand, the fiscal policy defines possible commercial benefits for the holders of tokens, which transcend the simple capital gains related to the token’s scarcity. Those could be any incentives to hold or stake the token instead of just buying the token only to settle a transaction. Those can take on the form of discounts, cashback, or waiving of fees.

The bottom line to the token’s fiscal and monetary policy is aggregate supply and demand and balance. Highly scarce and commercially beneficial tokens can lead to low market liquidity and high price volatility, resulting in deflationary spirals. Highly abundant and not commercially viable tokens can result in severe token price drops. A proper balance is critical.

Payment for goods & services on the Sharesome platform (for advertising, messaging, tipping) is facilitated through Flame Credits. Flame Credits are an interall off-chain representation of the Flame Tokens. The exchange between the two is available at any point in time. For simplicity, we will further refer to both of them as Flame Tokens (since the two are interchangeable).

Pricing.
Flame Tokens purchased through the Sharesome platform (Treasury) are purchased at a premium on market prices. Any purchases done on the platform are converted to Flame Tokens in the background, creating demand for tokens. This demand is filled by Sharesome’s token balance. If the balance is insufficient, then tokens are purchased off the market to replenish it.

Buyback & LP.
Buyback and burn has been a very successful and popular mechanic in the crypto space, which has historically helped token price appreciation and keeping the tokens scarce.

Burning tokens based on collected fees has some very desirable effects. The approach’s beauty is the inverse correlation between the project’s success and the number of tokens burned, essentially creating a self-regulating mechanism for the total number of tokens in circulation.

With the emergence of Decentralized Finance (DeFi) and Automated Market Makers (AMM) such as SushiSwap, however, a new approach has emerged which has the core benefits of the buyback and burn approach, together with the added value of deeper liquidity – buyback and liquidity provision. In this scenario, instead of burning tokens, they are first provided as liquidity for the token on its main AMM market and then the resulting LP tokens are burned. Thus combining the benefits of the reduced token supply together with deeper liquidity for the token.

In the case of Sharesome, at least 10% of the premium on Flame Tokens purchased directly through the platform will be used as funds for Buyback and LP.

LP Subsidy.
One of the main goals of the project is to do as fair as a possible token distribution model. This is done via our LP subsidy program. Flame Token is a fixed supply token with a maximum of 21 BN tokens minted. However, not all of those tokens will be put into circulation from day one. In order to bootstrap the early days of the system and ensure that there is plenty of XFL liquidity, 20% of the total XFL supply will be dedicated to rewards for liquidity providers for the USDC/XFL pair on SushiSwap.

The rewards are structured on a weekly (epoch) basis and the entire incentive scheme will last for 100 weeks. Each week 42 MM tokens will be distributed to liquidity providers on the platform. This will be done via staking the SushiSwap USDC/XFL LP tokens in a contract.

Taking the above into account gives us the following token allocations: 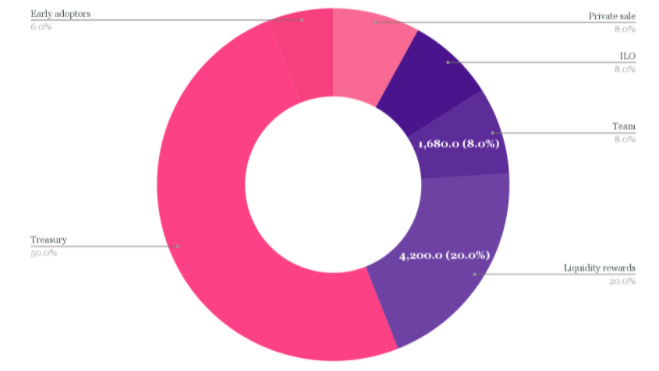 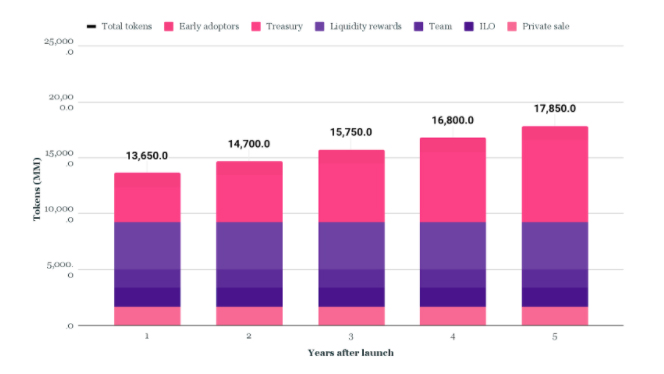 Breakdown of the token release schedule, by year and by allocation.

Economy-wise, the closest sibling to the XFL is the Binance coin (BNB) as both tokens are used as a fee discount token with an aggressive buyback. It is essential to point out some crucial differences in this regard.

The beauty of the buyback & LP approach is the inverse correlation between the project’s success, and the number of tokens locked, essentially creating a self-regulating mechanism for the total number of tokens in circulation, while at the same time strengthening the token’s liquidity.

As will be discussed further, a faster reduction in circulating tokens would mean faster token price appreciation and vice versa.

Sharesome does not intend to raise money via the Flame Token (except for covering some operational ILO expenses), nor is the token created for this purpose. In order to facilitate the distribution of the token, however, Sharesome will hold an Initial Liquidity Offering with a very small % of the total XFL tokens (1.68 BN tokens or 8% of the total supply).

The sale will be held on SushiSwap with the initial liquidity provided of 5 MM tokens and ~2000 USD equivalence in USDC within the liquidity pool, which works out to a token price of 0.0004 USD per token. As the pool is depleted, Sharesome will continue to fund the pool with more XFL tokens and stabilizing the token price, as per the bonding curve below (based on the amount of released tokens):

Disclaimer:
While Sharesome will try to replicate the above bonding curve by funding the SushiSwap pool, it cannot guarantee the price, if large purchases are done via the pool. As such in the short term the price might fluctuate a lot more than depicted on the graph above.

If all 1.68 BN XFL tokens are funded to the pool, following the above curve, this would be the equivalent of raising 1 MM USD. The funds would be distributed as follows (assuming all tokens sold):